SOLIDARITY WITH THE PEOPLE OF SYRIA 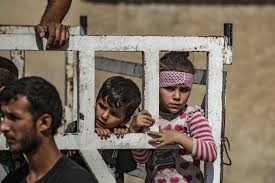 From the early hours of Wednesday, the people of the region are witnessing a new imperialist crime with Turkey’s new invasion in Syria.

An invasion that began with the blessings of the USA and takes place within the context of the imperialist competitions in the region. This development in itself reveals the false arguments of the Greek Government on the occasion of Pompeo’s visit to Athens, where they attempted to present the USA-NATO as “Pigeons of Peace”. Before the ink dries, it is revealed the magnitude of the risks for the Greek people because of the Greece-USA Mutual Defense Cooperation Agreement – MDCA.

The new Turkish invasion, in addition to the thousands of uprooted and casualties it is causing at the same time in Syria, could be the beginning of a domino of fire and disaster all over the wider region with serious consequences in Greece as well.

The World Federation of Teachers Union, FISE, a member of the WFTU, stands firmly on the side of the Syrian people who have been the target of imperialist interventions for years. We express our solidarity with the Kurdish populations targeted and are made pawns in the imperialist competitions.

FISE calls on teachers’ unions around the world to express their solidarity with the Syrian people and condemn not only the Turkish invasion but the imperialist policy that is creating wars as well.

The struggle of the peoples can be the only exit from the murderous plans of the imperialists.

No Participation of Greece in the Murderous Plans of the Imperialists

Close down Now all the bases of the imperialists in Greece