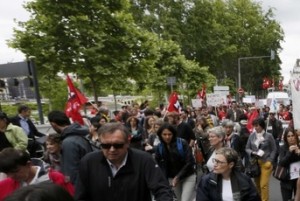 French teachers began mobilisations on 19th May, in response to the education reform, which, among other things, aims to strengthen the “autonomy” of schools. Teachers from the primary level marched in Paris and many other cities protesting that government plans will not enhance public education as is being claimed but will rather disintegrate knowledge. The French government has expedited measures, which for various reasons have not been invoked so far, and under the directions of the EU adapt public schools to the current needs of the “market”.