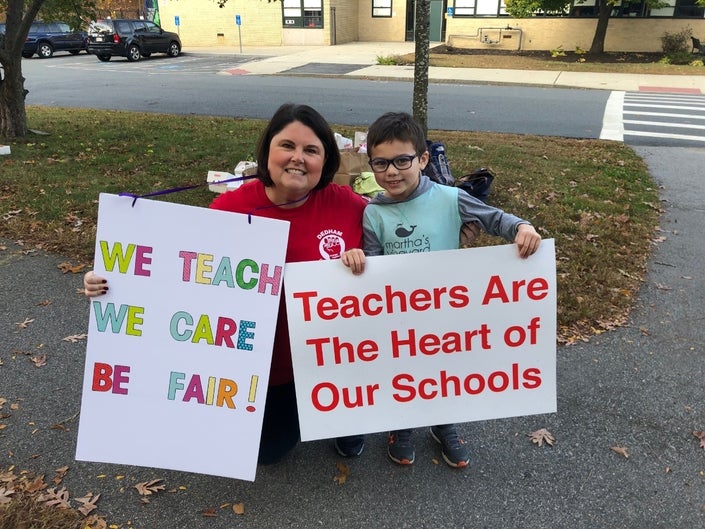 Dedham Teachers Strike: What To Know

This is the first teachers strike in the state in 12 years and has the support of the state teachers union.

DEDHAM, MA — Public schools were closed to students on Friday in Dedham, but teachers were lined up outside, with picket signs. Teachers went on strike Friday after an overwhelming majority in the Dedham Education Association voted 275 to 2 in favor of the strike after negotiations between the union and the school district reached an impasse.

This is the first strike in the state in 12 years and the DEA has the support of the state teachers union. The teachers hit the picket line in front of Dedham public schools at 6:30 a.m. on Friday — It’s illegal for public school teachers to strike in Massachusetts.

The Department of Labor Relations issued an order to stop the strike. The order warns the DEA and its officers to “publicly disavow and disclaim any future any future strike,” among other things.

Why Are Teachers Striking

DEA president Tim Dwyer said the strike started over disagreements on salary increases, health care coverage and other issues. Dwyer said the union has been in negotiations over a fair contract with the district for two years.

“The members of the DEA have not been treated fairly or with any sort of respect since we started bargaining this contract nearly two years ago,” said Dwyer. “We were pushed into taking this extreme step and want to return to the bargaining table so we can get back to the classroom.”

DEA Bargaining Team member Rachel Dudley added that teachers are asking that the contract include important topics to resolve issues in the district, including sexual harassment.

“Our fight for a fair contract is about ensuring that the community has access to the best possible public schools,” Dudley said, “The issues we want resolved – including best use of educator time, policies for student use of technology, and a means to address sexual harassment—are concerns brought forward by classroom teachers. Our work environment is the learning environment for Dedham children.”

Shortly after the news broke of the Dedham teachers vote to strike, the Massachusetts Teachers Association threw a hat in the ring, offering unwavering support to the DEA. MTA President Merrie Najimy and Vice President Max Page issued a statement on Thursday night saying the state union “strongly supports,” the DEA’s fight for a fair contract.

The statement calls on Dedham Superintendent Michael Welch and the Dedham School Committee to head back to the bargaining table.

“With their inadequate proposals and their snail’s pace of bargaining, the superintendent and School Committee have sent a clear message: We do not value the educators who teach our children,” the statement reads, “The members of the Dedham Education Association are fighting to preserve the dignity and professional voice that public school educators deserve as they dedicate their lives to ensuring the success of their students.”

Support is also pouring in from higher places, including congressional candidate Brianna Wu and presidential candidate Bernie Sanders. Sanders voiced support for the teachers strike in a tweet on Friday while using it as an example of a workers movement.

Wu released a statement calling for both parties to try to reach an agreement that is fair to teachers.

“For two years, the teachers of Dedham have been working without an agreed upon contract with the Town of Dedham. Yet, they have been continuing to do one of the most valuable jobs that can be performed – educating our youth,” the statement reads, “It is unfortunate that an impasse in negotiations between the Town of Dedham and the DEA has led to a strike, but I call upon both parties to double their efforts to reach a fair agreement for Dedham teachers. Our students, and our educators and their families, deserve nothing less.”

How Long Will The Strike Last

DEA officials haven’t put a hard end date on the strike, but simply said it is prepared to strike until it has a fair contract for its teachers. School was canceled on Friday for the strike but the district has not made public whether classes will resume on Monday.

A rally has already been planned for Saturday at the Dedham American Legion to support educators on strike. According to ABC 7 Boston, the union and district are communicating and plan to work through the weekend but no agreement was reached yet.

Nicholas Anastasopoulos, an attorney with Mirick O’Connell’s Labor, Employment and Employee Benefits Group, told Patch all roads from this strike lead back to the bargaining table, where both parties will have to come to an agreement to get teachers back in the classroom.

Anastasopoulos said while two years of negotiations is on the longer side, it’s not entirely uncommon. He added that while striking brings attention to the issues the union is putting forward, it also puts the union at risk of losing public sympathy the longer they strike. “There are risks to those kids who aren’t in school,” he said, adding that any days missed will have to be made up on the backend of the year.

Anastasopoulos said if teachers remain on strike much longer they can expect an injunction from the court.

School officials in a statement said they are “disheartened” that the association voted to strike and said the ones most hurt by this decision are the teachers and families.

“We take the concerns of our educators seriously and have worked over the course of the last 21 months of negotiations to offer consideration and negotiated agreement to dozens requests presented by the DEA at the outset of negotiations,” Superintendent Michael Welch said.

Welch went on to say the vote to strike came just weeks before both sides were scheduled to meet with an independent arbitrator in an attempt to reach of a fair contract.

“As a district, we are saddened that our educators have chosen to consider this drastic and harmful action,” Welch said. “We wholeheartedly appreciate and support our wonderful educators. They have shown unwavering enthusiasm and engagement in the classroom, and they have been propelling the incredible advancements we’ve made in our schools over the last few years, despite this ongoing difficult contract process.”