Then the Chicago Teachers Union will hold a rally at 10 a.m. just before the Chicago Board of Education’s monthly meeting at 42 W. Madison St. Union President Jesse Sharkey plans to discuss the strike during the Chicago Public Schools board meeting at 10:30 a.m.

Picket lines stretched two and a half blocks around Acero’s downtown Chicago headquarters at 209 W Jackson Blvd. on Tuesday as the nation’s first strike by charter-school educators canceled classes for thousands of students.

Acero teachers participating in negotiations said Tuesday that management has refused to make concessions on their key issues of pay, classroom conditions and sanctuary status for students. 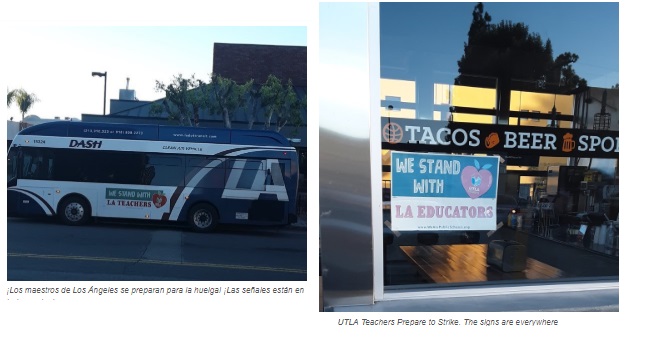 First-year teacher Amanda Bright said she left her home state of Ohio to work for Acero schools.
“I believed in their mission and vision that was explained to me, which is to help minority students who need it the most,” Bright said. “We are fighting for [our students], we are not getting paid, we don’t want to be here. I would love to be in my classroom right now teaching Algebra 2, but I’m not because we are making sure they are getting the opportunities they deserve.”

Teachers for the Acero charter schools network began picketing Tuesday morning, shutting down 15 government-funded campuses operated by the privately-managed Acero, which used to be known as the UNO Charter School Network. Acero teachers were bolstered by support from the Chicago Teachers Union and national labor leader Randi Weingarten.
About 550 teachers and paraprofessionals aren’t showing up for classes at one of the largest charter networks in Chicago, forcing Acero’s management to close its doors to the 7,500 students enrolled.

Acero leaders encouraged parents to keep their kids at home. The charter network also directed parents to Chicago Park District programs and some YMCA locations. A complete list of school-specific resources was posted on the network’s website.

They’re also seeking sanctuary status for their schools where more than 90 percent of their students are Latino. They want Acero to invest into classrooms some of the millions of dollars in reserves revealed in an audit at what Sharkey called “literally the 11th hour and 59th minute.”

Joining the picket lines was Weingarten, president of the 1.7 million-member American Federation of Teachers, the CTU’s parent organization.

“What a union is, it is the vehicle which we help teachers secure the teacher-learning conditions they need and deserve that management won’t do,” Weingarten said. “I don’t know if the charter’s powers that be are pulling their strings, but it is certainly not on behalf of the students that once they show they are flushed with cash that they still refuse to make any proposals to reduce class sizes.”
1st CHARTER SCHOOL STRIKE IN THE U.S. (click link to view)

Teachers stress need for sanctuary status
Teachers on the picket lines Tuesday stressed the importance of sanctuary school protections for their students and families, a designation that bars federal agencies like Immigration and Customs Enforcement from entering campus without a court order, warrant or subpoena.

Such working conditions for staff are bargainable for charter schools, though not for Chicago Public Schools, union attorney Robert Bloch said.

Yecenia Iturve, a fourth-grade teacher at Acero Schools, said this is one of the key issues that forced her to walk off the job Tuesday. Many of her students have openly expressed their anxiety to her about their family’s immigration status.

“Being a sanctuary school means that our students, and their family, have a safe place to come to. Our students need to know this is a safe place for them.” Iturve said. “With the way national politics are going, I think it’s necessary for this kind of language and protection to be in our contracts.”