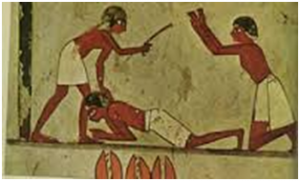 The outcry of the Egyptian society causes the deadly beating of 12 year old student from his teacher in a humble working-class district of Cairo on 5/3. The unfortunate child died Sunday in a hospital of the Egyptian capital, causing concern about the continued use of violence in schools.

Information from the Egyptian newspaper “Al Ahram” said the 12 year old boy was transferred unconscious to hospital in the region, because of cerebral hemorrhage suffered after the brutal injury to the head from the “educator ” of the class.

Details of Egyptian “National Council for Childhood and Motherhood” note that the first ten months of 2014 attacks on children increased by 55% over the previous three years.

On the occasion of the deadly incident in Egypt the World Federation of Teachers Union FISE invites organizations and educators members to deal with particular interest in the anti-authoritarian education.

Violence, intimidation, authoritarianism, terrorism are phenomena that fit into the capitalist system and the capitalist education. Aimed at educating young students that they obey and submit to the system that wants to continue the exploitation of the working class. Imperialist mechanisms in Europe, America and around the world, allied to the international educational organization IE, develop, propose and fund programs to combat the phenomenon bulling in schools. Meanwhile they keep supporting measures and programs that impose more poverty to workers and the working classes and also greater abstraction of their rights.

The class teacher union movement opposes and condemns methods and practices that lead to manipulation of the new generation. Our own goal is to educate the young generation with love for values ​​such as freedom, fighting spirit, love for the historical and scientific truth. Our own goal is to instill in the young generations the courage and faith that can fight for what righfully   belongs to them and that may prepare a better future for our class.

We invite educators around the world to resist to all the difficulties of the profession by turning their anger on the system and governments who kill their teachers and not on young children. To resist and condemn phenomena beatings and humiliation of child personality. To become involved with the International  Union class  movement, the World Federation of Trade Unions WFTU, FISE  and to fight for the right to education, health, shelter , to clean drinking water, safety, peace, for all the  children, to condemn and fight the  system and mechanisms that remove all these goods from our students and their families.